Dr. Hui Yew-Foong recently co-published a book "Heritage as Aid and Diplomacy in Asia," which explores how heritage is used as aid and diplomacy by various agencies to produce knowledge, power, values and geopolitics in the global heritage regime.
Date: August, 31. 2020

Drawing from eleven rich case studies in Asia, this book is the first to explore how heritage is used as aid and diplomacy by various agencies to produce knowledge, power, values and geopolitics in the global heritage regime. It represents an interdisciplinary endeavour to feature a diversity of situations where cultural heritage is invoked or promoted to serve interests or visions that supposedly transcend local or national paradigms. This collection of articles thus not only considers processes of “UNESCO-ization” of heritage (or their equivalents when conducted by other international or national actors) by exploring the diplomatic and developmentalist politics of heritage-making at play and its transformational impact on societies. It also describes how local and outside states often collude with international mechanisms to further their interests at the expense of local communities and of citizens’ rights. 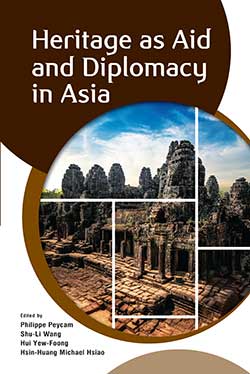 Heritage as Aid and Diplomacy in Asia explores the following questions: Under the current international heritage regime, what are the mechanisms of—and the manipulations that take place within—ideological, political and cultural transmissions? What is heritage diplomacy and how can we conceptualize it? How do the complicated history and colonial past of Asia constitute the current practices of heritage diplomacy and shape heritage discourse in Asia? How do international organizations, nation-states, NGOs, heritage brokers and experts contribute to the history of the global heritage discourse? How has the flow of global knowledge been transferred and transformed? And how does the global hierarchy of cultural values function?